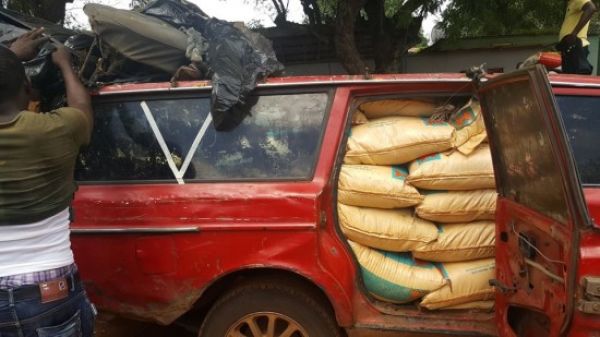 Smugglers are having a free ride along Mile2/Seme Expressway, Lagos, transporting large quantities of imported rice, frozen poultry products, vegetable oil, fish and other banned imports into the country.

As a result of the #EndSARS protest by Nigerian youths across the nation and the subsequent civil unrest, officers and men of Nigeria Customs Service, NCS, the Police, Nigeria Immigration Service, NIS, and other security services have vacated the route.

Some persons of questionable characters and motives under the guise of the civil unrest, had attacked the security agents especially the Police.

A source told our correspondent that the crisis created room for free smuggling from Cotonou into the country, thereby violating government law on partial closure of the borders.

When one of our correspondents took a bus ride from Badagry to Agbara on Thursday and Friday last week, there was no single security personnel on the route.

Several buses were seen being loaded at Badagry for onward journey to other parts of the state.

A source also disclosed that the situation was the same from Seme to Badagry.

The source said that people came as far as from Lekki, Ikorodu, Epe and even outside Lagos to take advantage of the absence of the security personnel to move large consignments of banned goods.

Meanwhile, protesters swooped on the Customs checkpoint at Agbara, looting smuggled items stored there before setting the offices ablaze.

The officers and men of the Service were said to have taken to their heels when they saw the protesters approaching.

An eyewitness said that the attack of the Customs checkpoint may not be unconnected with the seized items stored there.