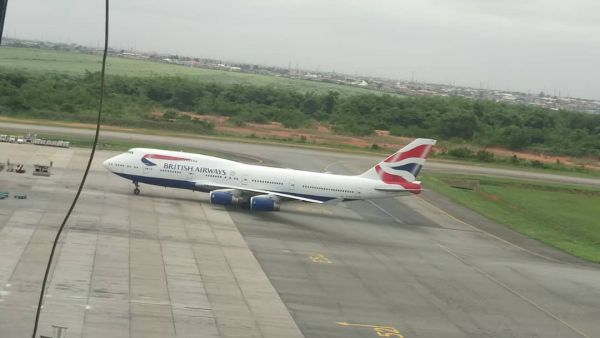 Flights operations were completely grounded in Akure Airport, Ondo State, following discovery of a crater dug on the runway of the airport.

The crater was allegedly dug on the runway by some suspected hoodlums during the #EndSARS protest in the state.

Officials of the Airport Authority reportedly discovered the crater in the night and alerted the management who thereafter halted flight operations.

Management of the airport was then forced to shut the airports thereby preventing flight from either taking off or landing in the airport.

The sudden development in the airport made travelling by air through the Akure Airports impossible.

A source in the airport told newsmen that ”The hole was discovered during the early morning check by the security of the airport.

“We are yet to know those behind it. I think the intention of the miscreants was to cause plane crash in the airport.

”Security operatives have been invited to see the place . The government has to deploy the security agents to the airport so as not to allow the miscreants cause havoc there.”

Spokesperson of Federal Airport Authority of Nigeria, Mrs Henrietta Yakubu, said that the cracks were discovered on the runway during the routine checks Monday morning.

Yakubu however said that the cracks had not affected the flight operations in the airport.

He noted that repair works had commenced on the cracked portions on the runway adding that there was no cause for alarm.