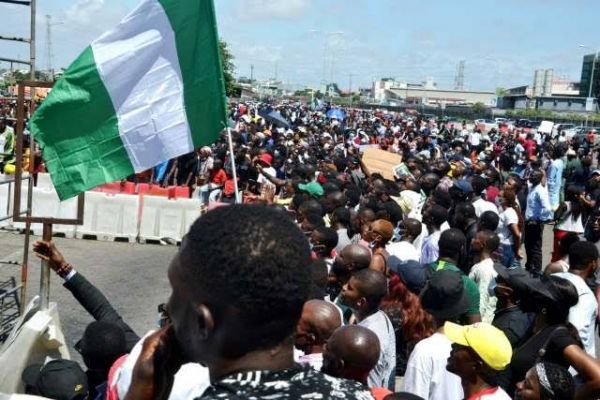 Some celebrities including musicians and good governance advocates have been thrown up among who to vote for in the ongoing election of leaders for the coalition of young Nigerians who participated in the just-concluded protests against police brutality and bad governance in the country.

This is revealed in an online voting process through Google form which is initiated by an unidentified group, simply named BNI.

Links are provided to the voting forms containing the list of nominees for the leadership positions at the federal and Lagos levels, and another for advisers.

A former education minister and presidential candidate in the 2019 general election, Mrs Oby Ezekwesili; popular pastor, Mr Sam Adeyemi; chairman of First Bank of Nigeria, Mrs Ibukun Awosika; Mrs Amina Salihu, among others, are listed among those that can be voted for as advisers.

The nominees for the national leadership contain a list of 19 names including the rap artist, Jude Abaga (M.I Abaga); a lawyer and hip hop artist, Folarin Falana (Falz); a vociferous member of the Bring Back Our Girls campaigners, Aisha Yesufu; The Not Too Young To Run convener, Samson Itodo; popular musician, Timi Dakolo; Feyikemi Abudu, and Editi Effiong.

BNI, in a statement issued on Friday evening via a digital publishing platform- Medium, noted that though physical road protests have been suspended, a new phase of follow-up activities such as voter education, sensitisation and community engagement will be sustained to ensure overhaul of Nigeria’s governance structure.

The statement, which was also shared widely on social media including WhatsApp, also condemned Tuesday’s shooting of protesters by soldiers at Lekki toll plaza and the accompanying disorderliness including the ongoing massive looting and vandalisation of both public and private facilities across major towns and cities.

The statement reads in part; “…We have watched with horror, the ensuing acts of violence, murder, looting, razing and vandalization of homes, businesses and organizations in Lagos State, and we will like to state emphatically that these are not protesters. We completely condemn any form of violence or looting.

“For the sake of the wellbeing of our comrades and ordinary citizens being adversely affected by this, we will deprioritise the physical protests, for now. But, for the sake of those who died, before the protests, during the protests, and at the hands of soldiers at the Lekki Toll Gate— people who the government has largely refused to acknowledge, the struggle must continue.”

While noting that the strength of the protesters had relied on the leaderless nature of the coalition that spearheaded the struggle, BNI said it was more pertinent now to give faces to the struggle across the country.

The statement further reads; “The leaderless nature of this protest but consistent oneness in demands have been part of our unique strengths. As we move towards consolidation and negotiation, it is now pertinent we put forward a diverse group to represent the different coalitions; from celebrities to activists, legal minds to strategists, journalists to entrepreneurs, etc. We consulted far and wide, to come up with these names, and while this may not be exhaustive, it offers us an interim basis to begin the negotiation and consolidation.

“The nominees will meet with different protest leaders/blocs across the country/states, and consolidate on a vehicle for continuous demands. They will also track actions of the Government, represent our demands and provide feedback to us regularly.”

On the next line of activities, the group listed, among others, clean-up of the public places destroyed by arsonists and thugs; continued online protest, offline community engagement, among others.

“During our protests, we made a conscious effort to clean up the venues and keep our environment safe for everyone. Following the condemnable vandalisations that took place since the curfews began, we are volunteering efforts towards the clean-up and rebuilding of the state,” the statement added.

Meanwhile, across some major streets in Lagos, posters with various inscriptions that raise questions about the state of the country and the welfare of the security operatives, are currently being posted.

These inscriptions with a campaign tag, #EndPoliceBrutality, include those written in pidgin English such as; “Oga Police, if anything do you today, you get hazard allowance;” “Oga police, you like how your life dey so?” “Oga police, another police fit kill your pikin, wetin you go do?”

In many states across the federation and particularly southern Nigeria, young men including celebrities, artists, lawyers, and political analysts had between October 7 and 20, flooded the streets to demand an end to extortion, harassment and brutality by a unit of Nigeria’s police known as special anti-robbery squad (SARS).

The massive campaign with the hashtag #EndSARS, soon gained global attraction with world leaders and celebrities voicing their positions in support of the campaign.

Though there had been instances of hoodlums attacking the peaceful protesters across some locations including Abuja, the federal capital territory, Lagos and Osun states, the situation degenerated further on Tuesday when soldiers shot sporadically at the protesters at the Lekki toll plaza.

The development led to widespread anger among the youths with thugs, arsonists, and looters invading both public and private facilities to steal and later set them on fire.