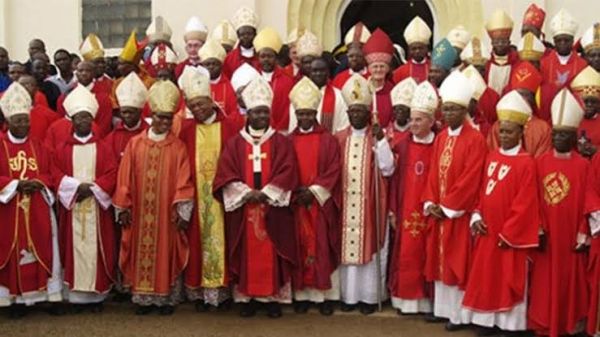 Catholic Bishop Conference of Nigeria (CBCN), a group of Catholic Church leaders, has condemned the shooting of unarmed #EndSARS protesters.

Amnesty International said not less than 12 people lost their lives in Lagos that day, but the military has denied the attack.

While Lagos State government promised to investigate the Lekki killings, President Muhammadu Buhari failed to mention anything related to the shooting in his nationwide broadcast on Thursday.

The religious leaders, in a statement issued by their president and secretary, Messers Augustine Akubeze and Camillus Umoh respectively, noted that they had observed the #EndSARS movement in the last two weeks.

“We stand with these youths and everyone who legitimately cries for justice,” they said.

The group also acknowledged that the protest was hijacked by hoodlums to perpetrate evil as against the goodwill of genuine protesters.

“A simple threat analysis of these protests would have revealed certain predictable scenarios which a responsible government, committed to the fine principles of the freedoms enshrined in our democracy, would have sought to control.

“Sadly, in the last few days, we have all watched as certain youth groups, some alleged to be sponsored by the government or its sympathisers, infiltrated the group of peaceful protesters and openly dared and threatened to visit violence on protesters and disrupt their gathering,” the statement said.

The clerics said the climax of the disruptive tactics was the unfortunate events on Tuesday night when some protesters were shot at.

“We condemn in the strongest words, the belittling, by these armed men, of the rights of citizens to peaceful assembly. With very heavy hearts, we respect the memory of those Nigerian youths who fell victim of this shameful tragedy that has drawn the attention of the entire international community. The conduct of these men in uniform was inhuman, dishonourable and detestable to say the least All lives remain sacrosanct,” the group said.

The religious leaders hoped that the government would investigate the killings and bring those culpable to account, without any long delay.

“Following the sad shooting incident mentioned above, we have noted with deep sadness and firm condemnation the acts of destruction, vandalism and violence being perpetrated in various parts of the country. We entreat and call on those who are engaged in these violent criminal acts to stop them forthwith, and tow the path of peace, in order not to mar the noble cause being fought for by the youths, and for which some of them have already paid the supreme price.”

According to the statement, the clergymen accused the federal government of paying “a scant regard for the agitations that have been building up in the country over these years, especially with the daily losses of human lives across the entire country.”

They said it is time to restore honour and dignity to the country and its citizens.

While they applauded the President for the disbandment of SARS and the address of Thursday, the bishops stated that more progressive steps need to be taken by the government.

“The government is, therefore, called upon to take full responsibility for stabilizing the country and restoring hope and confidence in its ability to lead our nation away from this disaster.

“We encourage the government to seek the best form of dialogue, to present to the nation, short, medium and long term solutions to this crisis. Positive and progressive minds in the country, including members of the political parties not in government, the wider civil society, including the religious and traditional institutions and the youths themselves, should be engaged in a round table discussion so that a way forward can be effectively charted. This matter concerns every Nigerian. The government should mobilize all of us towards a successful outcome.”