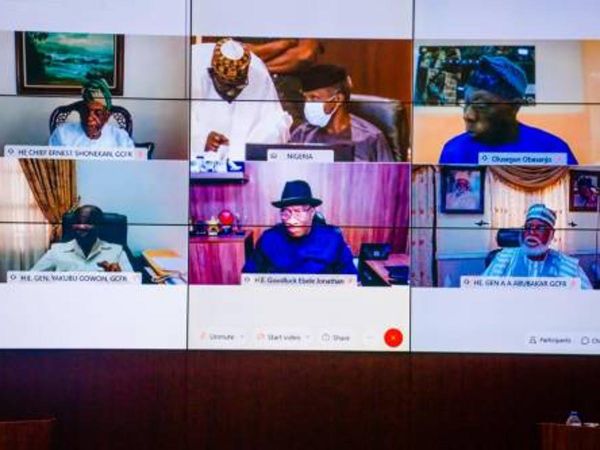 President Muhammadu Buhari says 69 people have been killed in protests against police brutality that have rocked the country.

The deaths were mainly civilians but include police officers and soldiers.

The president announced the toll in an emergency meeting with former Nigerian leaders aimed at finding ways to end the unrest.

A group that has been key in organising the demonstrations has now urged people to stay at home.

The Feminist Coalition also advised people to follow any curfews in place in their states.

The protests have drastically subsided but an uneasy calm remains in several cities.

Officials said a curfew introduced in Lagos state would be eased.

The protests in Nigeria began on 7 October with mostly young people demanding the scrapping of a notorious police unit, the Special Anti-Robbery Squad (Sars).

The unit was dissolved days later, but the protests continued, demanding broader reforms in the way Nigeria is governed.

They escalated after a shooting in the nation's biggest city, Lagos, on Tuesday, when rights group Amnesty International says security forces killed at least 12 people. Nigeria's army has denied any involvement.

At Friday's virtual meeting, President Buhari, 77, said his administration was committed to meeting the demands of the protesters. But he said his government would not fold its arms and allow criminals who had hijacked the protests to continue to perpetrate "hooliganism".

The president told the meeting that 51 civilians, 11 police officers and seven soldiers had been killed in the unrest, his spokesperson said. It was not immediately clear whether these figures included the protesters allegedly killed by security forces in Lagos on Tuesday.

The president previously made a short televised address in which he urged protesters to stop demonstrating and instead engage with the government "in finding solutions".

He faced criticism for not mentioning the Lagos shootings.

Coming at a time when the unrest is still smouldering, this announcement is surprising. Again, the government does not say who is responsible for the deaths, so people are likely to be further enraged.

Most want justice, especially for the civilians killed in the past two weeks.

Many believe the deaths could have been avoided if the government had made more concessions when the peaceful protests started, and so got demonstrators off the streets. But instead, protesters were met with brute force from police officers, most of whom still walk free.

We still don't know how many people were killed in Lagos at the Lekki toll gate, the epicentre of the protest that became a killing field. The government has barely recognised that incident and the many questions around it.

As people are still being reported missing, this figure may well go up in the coming days.

Lagos and other parts of the country have seen buildings torched, shopping centres looted and prisons attacked since Tuesday night's shooting.

The state's governor, Babajide Sanwo-Olu, also published a list of 23 police officers who have been charged or are waiting to be charged with various offences relating to brutality. The charges include murder, manslaughter, involuntary manslaughter, armed robbery and causing grievous body harm.

He said he had published the list to show he was "rebuilding Lagos and ending police brutality".

The south-west state of Osun also suspended a 24-hour curfew imposed to deal with the riots.

The Feminist Coalition earlier encouraged "all young Nigerians to stay safe, stay home, and obey the mandated curfew in your state".

"We are merchants of hope. Our priority is always the welfare and safety on the Nigerian youth," it said.

The group said it would no longer be taking donations for the #EndSARS protests.