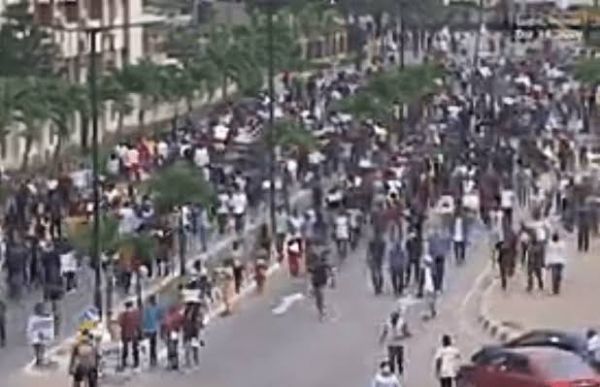 Nigeria’s Independence Day is Oct. 1, 1960. But Oct. 20, 2020, will go down in Nigerian history as the day the whole world saw images of the green-and-white striped flag stained with the red blood of protesters bludgeoned by the forces of the state. The abuses of President Muhammadu Buhari’s government are no longer being kept in the dark.

Around the world, people have continued to protest and send resources to organizers on the ground. Nigerian celebrities such as DJ Switch have gone so far as to broadcast the army’s brutality on social media. On her Instagram live feed on Monday she kept filming as crowds tended to gravely injured protesters; she held up live bullets allegedly fired by army officials. “Call CNN! Call BBC!” she urged on the feed, and viewers responded, tagging international journalists to watch the live stream.

Nigeria’s state forces want to keep the wool over the world’s eyes, borrowing from President Trump’s playbook and tweeting “Fake News!!!” in response to the reports of mass deaths at the hands of military officers. Meanwhile, Nigeria’s civilian politicians have been determined to revel in their utter uselessness.

Buhari promised to disband the Special Anti-Robbery Squad (SARS), a much-hated unit of the Nigerian police with a history of violence. But in reality, he merely created a new unit called SWAT (Special Weapons and Tactics). Other leaders have directed their flair for bombast at foreigners — with one leader demanding to sue Twitter co-founder Jack Dorsey for $1 billion in damages to the Nigerian government for tweeting support for the #EndSARS cause.

As I have written before, Nigerian leaders have subjected their people to absurd, Kafkaesque cycles of committee after committee to study police abuses, and panels to investigate the progress of previous committees. Not to be outdone by the spectacular mediocrity of previous governments, the National Economic Council, chaired by Nigerian Vice President Yemi Osinbajo, announced last week that it would also establish “Judicial panels of Inquiry to receive and investigate complaints of Police brutality or related extrajudicial killings.” To add insult to unseriousness, it vowed that the government’s assignment to investigate itself would take all of six months.

Buhari, a former military dictator who was elected into office in 2015, rode on a wave of domestic and international discontent with his predecessor, Goodluck Jonathan. The #BringBackOurGirls campaign exposed the latter’s clumsy and slow response to the terrorist group Boko Haram, which led to the deaths of thousands of Nigerians and the displacement of more than 2 million. Buhari promised the world that he would be different and that he would protect Nigerians. We were wrong to trust him.

This is not the first time the army has slaughtered Nigerians under Buhari’s watch. In 2015, the Nigerian army massacred Shiites at a compound in Zaria, Kaduna state, killing 348, dumping many of the bodies in mass graves. At the time there was little outcry from international governments — aside from Iran — or even within Nigeria. The lesson is a universal one: that all too often, privileged classes turn a blind eye when the state abuses marginalized groups with impunity, only to be hit with shock and surprise when the state trains their guns on them. But this time feels different.

The legendary musician Fela Kuti, who would have turned 82 this month, sang of harmful politicians and elites in his song “Vagabonds in Power.” Buhari, Nigeria’s top VIP, is counting on the silence of his fellow VIPs across the continent. As international statements come in putting pressure on Buhari, many African presidents have been silent. African leaders who were all too happy to pander to the diaspora, issuing statements and resolutions on police brutality in the United States against Black people, have been silent on the situation in Nigeria.

Ghanaian President Nana Akufo-Addo was quick to reach out to the family of George Floydand make a moving statement for Floyd’s funeral. Akufo-Addo, chairman of the 15-nation Economic Community of West African States (ECOWAS), has issued weak statements on Nigeria. The African Union has yet to make a statement. The ECOWAS Commission’s statement reads like a PR effort on behalf of Nigeria, praising the “important decisions” that Nigeria has taken on SARS reform and calling on protesters remain peaceful, as if they are responsible for their own killings.

While Africa’s elected leaders remain mum, Nigeria’s brave citizens continue to make their voices heard, supported by the international wave of Black resistance against state violence. Nigerians are showing the world that in a real democracy, true power will always lie with the people.