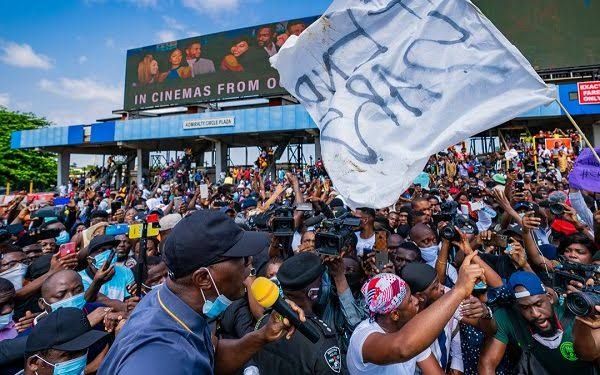 #EndSARS protesters on Monday defied threat by the Federal Government to deploy security agents in quelling their protests against police brutality across the country.

Protesters, mostly youths as early as 7am trooped out in major cities in Lagos, Ogun, Edo, Abia, Ondo, Ekiti, Oyo and Ebonyi states blocking roads and calling for police reforms.

In some locations in Abuja, security agents watched as thugs attacked protesters.

Recall that since October 8, youths, who are calling for disbanding of the Special Anti-Robbery Squad of the Nigeria Police, have been embarking on peaceful protests.

On Sunday, the Inspector-General of Police, Mohammed Adamu, disbanded SARS and a few days later announced the setting up of the Special Weapon and Tactics Team.

But the protesters insisted that the government had not met their demands, including prosecution of SARS operatives involved in extrajudicial killings.

Federal Government on Sunday warned the protesters that it would not tolerate a descent into anarchy.

The protest leaders, in an interview with our correspondent said the protests were peaceful and accused government of using police and thugs to disrupt the demonstrations.

On Monday, vehicular and human movements were at a standstill in many parts of Lagos including  Ijanikin, Iyana Isashi and Agbara axis of Lagos – Badagry Expressway as angry youths protested against police brutality.

Protesters blocked the expressway with two articulated vehicles at Agbara, preventing vehicles from coming or going out of the area.

Ovi Kuponu, one of the coordinators of the protest, told journalists the youth in Badagry and Agbara came out to protest deplorable state of the expressway and bad governance.

Thousands of youths occupied the stretch of Awolowo Road from Allen Junction to the Lagos State Secretariat in Alausa.

Almost all the major roads in Ogun State were blocked on Monday by the protesters.

But besides SARS, the protesters said they were protesting against bad governance.

The protesters, under the aegis concerned Mowe youths,  assembled at Mowe Junction as early as 8am and blocked  Sagamu Interchange .

Also thousands youths in Owode-Yewa in the Yewa South Local Government Area of the state  blocked some roads in protest against bad governance.

Also, Benin, Edo State capital, was shut down by protesters under the under the aegis of the #EndSARS agitation.

All the major roads in the city were blocked as early as 7am with bonfire dotting strategic points in the city.

The entire city centre was on a  complete lockdown as protest points were set up in the various roads such as Airport Road, Akenzua-Plymouth Road, Ring Road and Siluoko Road.

In all the points, the messages by the protesters remained the same: ‘No to SARS’ and ‘Buhari must go.’

The protesters, started their demonstration from Abia Tower of Peace, along the Federal Expressway headed for the city centre, where major roads were blocked.

Moving through Okpara Square, the protesters went to the Government House to see the state Governor, Okezie Ikpeazu, who did not address them.

Angered by this, the youth blocked the Government House – Federal Medical Centre – Aba road – Ikot Ekpene road junction and cooked their meals there.

Shouting slogans against Buhari and the police, the protesters were carrying placards with inscriptions such as ‘End SARSSARS, ‘SARS must end,  reform Nigeria.’

The  protesters in Ekiti State blocked all major roads in virtually all communities in the state making intra and inter-city movements impossible.

Also, youths in Akure, Ondo State capital on Monday took the protest to the Ilesa-Akure-Owo Expressway where they were singing different solidarity songs and barricading the road.

The protesters used trucks to block the road preventing vehicular movements. For several hours, there were no movements of vehicles while travellers were stranded on the road.

Youths in Kano also protested against police  brutality on major streets in Sabon Gari area of the metropolis.

The protesters, some of whom were clinging on tricycles, and private vehicle rooftops were displaying placards with different  inscriptions such, ‘End SARS, SWAT, end KAROTA, end police brutality, end Kano corruption’, among others.’

Presenting their demands through their spokesperson,  Steven Ugama, they called on the state Governor, David Umahi, to set up a judicial panel of inquiry to look into the illegal activities of the SARS.

Responding, Umahi,  who described their action as constitutional, assured them that nobody would molest them.

In Osun State, #EndSARS protesters returned to streets in Osogbo, the state capital, occupying Olaiya Junction and forcing traders in the area to close their shops.

Recall that five protesters were shot dead by security agents in the state on Saturday.

Offices were shut down and  business activities paralysed in most parts of Ibadan, the Oyo State capital as #EndSARS protesters blocked major roads to press home their demands.

In Abuja, security operatives and clubs-wielding thugs on Monday, descended on #EndSARS protesters.

While the police and soldiers dispersed the campaigners with tear gas and horse whips, hoodlums assaulted them and set ablaze eight vehicles at Kabusa Junction, Apo, and at the Central Business District.

Trouble started when the thugs, who objected to the blockage of the Apo road by #EndSARS protesters, attacked the activists with sharp objects and also vented their anger on the cars parked at the roadside car mart.

A video of the burning cars also went viral on social media.

A number of people were injured as the hoodlums reportedly unleashed their anger on passers-by. There were reports that two persons died but this could not be immediately confirmed.

The violence sent panic waves among residents of the area who were caught in the attack.

Security personnel at the scene were said to have failed to stop the rioters from hurting the people.

A resident, Nana Ekanem in a tweet said she narrowly escaped being hurt, adding that she had to take a back road to avoid the scene.

“The protest has turned into a riot in Apo area. It was by God’s grace I got home. The Bolt (car) I took had to drop me inside Apo resettlement, I had to walk through Mechanic village. Anti-SARS protesters blocked the road, were burning tyres, I saw injured men,” she tweeted.

FCT police spokesperson, Mariam Yusuf, confirmed the incident, stating that investigation had commenced into the riot.

In the second attack which occurred at the Central Business District, a vehicle was set ablaze by the suspected thugs.

The police said no life was lost in the attack on the activists who were displaced from the Central Bank of Nigeria headquarters which they occupied on Sunday night while defying a downpour.

He attributed the incident to what he described as “a clash between #EndSARS and pro-SARS protesters.”

The command also confirmed the death of an #EndSARS protester, Anthony Onome, who died as a result of injuries sustained during an attack by suspected hoodlums in Kubwa on Saturday.

“Onome died during treatment on Saturday and his body is in our mortuary. I dont know if he was among the protesters but he was brought to the hospital for treatment after he was stabbed“, he explained.