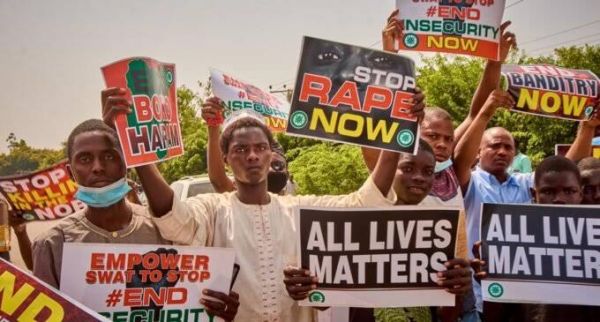 The killing of a 23-year-old man, Saifullahi Sani, allegedly by police on Monday sparked a violent protest at Kofar Mata area of Kano City.

Many youths in the area took to the street in the morning, burning tires on the ever-busy Abdullahi Mohammed Wase Road thereby disrupting traffic while chanting war songs and calling for justice for the family and the society.

The killing is coming on the heels of the ongoing EndSARS protests across the country calling for an end to police brutality as well as a protest in the state calling on authorities to address insecurity across the North.

Though normalcy has since returned to the area by Monday evening, as people were going about their normal businesses, many residents of the area were yet to recover from the shock of the incident.

Sympathisers have since besieged the bereaved family house to condole with the family as they await the arrival of the corpse for the funeral prayer.

Father of the deceased, Sani Musa, said at about 1 am Sunday night, he heard a commotion outside and later found out that it was policemen that came into the neighbourhood.

“They came in beating people who were sleeping outside under the Solar panels. They saw him (the deceased) with his phone awake, and they snatched it and continue to beat him,” he said.

“They dragged him on the floor for long to their vehicle in which they joined him with three others. People saw them as they kept beating them. They then moved them to their office where they continued hitting them all over their body and stomach.

He fell down and they later took him to Murtala Mohammed Hospital where he died last night,” he added

Musa said the police have since reached out to the family calling for calm and seeking forgiveness and for the family to see the event as the will of God.

He, however, noted that “This is beyond my power to forgive them because it is a collective family decision.

“What I will tell you is that we shall seek redress and justice over what happened to my son. He is the sixth of my children and about to move into transportation business. He was into laundry.”

An uncle of the deceased, Hamisu Musa, said on hearing about the incident the youths around the area mobilised to the streets to show their anger against the brutal attack on the innocent young man.

He said all the operatives that invaded the area were in mufti, except one of them who was wearing police uniform.

He said that was the first time that police operatives stormed the alleys of Kofar Mata in such an aggressive manner.

Already, human rights activists have taken interest in the case to secure justice for the family.

A.A. Haruna Ayagi, Executive Director, Human Right Network said “We heard of the incident,” adding that they “moved the corpse to Aminu Kano Teaching Hospital to investigate the cause of death and later to the family for burial.

“We will not remain silent until justice is done to the families and perpetrators of the act.”

However, the police while reacting to the incidence in a statement issued by the state police command Spokesman, Abdullahi Kiyawa said police received a report that some groups of thugs engaged in fighting at Kofar Mata Quarters Kano and a patrol team drafted to the scene arrested two suspects with knives.

“They (suspects) were handcuffed and put into the Police Patrol Vehicle with an officer guarding them. When the Police team went inside the Quarters for more arrest, the thugs dispersed. They later re-grouped and attacked the police officer inside the police vehicle and set free the two handcuffed suspects.

“When the team came back, they found the officer lying down in pool of blood stabbed on his chest, stomach and other parts of his body and one other person lying down,” he said.

Kiyawa said the young man was confirmed dead at the Murtala Muhammed Specialist Hospital Kano while the police officer was admitted at the intensive care unit of the hospital.

In a related development, a group of Kano youths on Monday stormed the streets in solidarity with the ongoing EndSARS protest that is taking place in major cities across the country.

The group, comprising males and females, protested against police brutality and called on the Nigerian government to address the problem by reforming the security agency.

Leaders of the protesters said they were tired of killings by SARS and police brutality, particularly on youth.

However, the protest did not go down too well with Coalition of Northern Groups (CNG) which accused security agencies of alleged double-dealing in the matter.

They said CNG members were barred from holding #EndInsecurityRally by security agencies but allowed the #EndSARS protest.