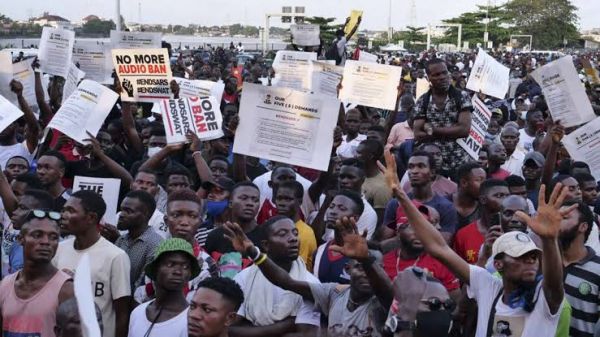 The #EndSARS protests continued on Saturday as economic activities were paralysed in some places across the country, including Lagos, Abuja, and Enugu.

For instance, hundreds of protesters barricaded the Kubwa-Zuba Expressway in Abuja, grinding traffic to a halt.

While some of the campaigners blocked the Kubwa section of the expansive highway, close to the NNPC Junction, others were said to have also blocked off the Gwarimpa section, causing a gridlock in the area.

One of our correspondents learnt that the protesters had earlier passed through the Gado Nasko Way, a major road in Kubwa, before taking over the highway.

The march caused motorists and commuters to be stranded on the 10-lane highway for many hours, with no security personnel seen in the vicinity.

Human and vehicular movements were also grounded on Saturday on major roads in Nsukka town, Nsukka Local Government Area of Enugu State, as a result of the #EndSARS protest.

A large number of protesters converged on the Union Primary School Nsukka, as early as 10 am, and went through Nsukka Barracks to Achara, Aku, Enugu road among others.

Also, as protests against police brutality continued in different parts of Benin, Edo State capital, on Saturday, there was gridlock in areas such as Ugbowo, Ramat Park at Ikpoba Hill and Agbor Park.

Meanwhile, the state Commissioner of Police, Mr Babatunde Kokumo, has ordered the Homicide Section of the State Criminal Investigation Department to commence a full-scale investigation into the immediate and remote cause of Friday’s killing of a protester by gunmen.

Kokumo, in a statement by the state Police Public Relations Officer, Mr Chidi Nwabuzor, vowed that the police would arrest perpetrators of the dastardly act.

Some youths in their hundreds also on Saturday thronged the major streets of Makurdi, Benue State capital to join the protest.

There were also protests across Lagos, leading to gridlock and affecting economic activities. Many motorists and commuters were stranded on the Lagos-Ibadan Expressway as some protesters had blocked some sections of the road.

In Ikorodu, Lagos, hoodlums clashed as #EndSARS protesters continued with their agitation for an end to police brutality in the country.

Eyewitnesses told one of our correspondents that the #EndSARS protesters were peaceful but they barricaded the road at various sections, playing music and passing their message in non-violent ways until some hoodlums started to attack them around 1 pm.

Also, in Abuja, some thugs again attacked #EndSARS protesters, four days after a group of hoodlums violently disrupted the demonstration by the youths at Berger roundabout, Wuse. The protesters, who barricaded the Kubwa-Zuba Expressway, were violently assaulted by the hoodlums.

The campaigners fled as the thugs, allegedly armed with sticks, knives and machetes, chased them and removed the barricades placed on the road.

Eyewitnesses said policemen and soldiers who were monitoring the rally failed to intervene or caution the hoodlums.

Two people were feared dead in Osogbo, Osun State, on Saturday as the #EndSARS protest in the state capital turned violent.

Also, many vehicles in the convoy of Governor Adegboyega Oyetola were damaged, following an attack by protesters.

The governor was addressing protesters at Olaiya Junction when the situation became rowdy and his security men, in a bid to ferry him to safety, resorted to shooting into the air, as hoodlums threw missiles at the convoy.

Oyetola apologised to the protesters for failing to address them after several days of demonstration and promised to make an enquiry from the Commissioner of Police to ascertain the alleged involvement of the National Union of Road Transport Workers’ boss in the attack on the protesters.

Some minutes to 3pm, shortly after the governor arrived in the venue, one of the protesters, Olawale Bakare, demanded an apology from him for refusing to engage the protesters after nine days of demonstration.

Bakare also demanded the immediate arrest and prosecution of a chieftain of the NURTW, identified as Asiri Eniba, who he accused of sending thugs to attack the protesters.

But the governor denied sending thugs to attack the protesters and promised to pay the hospital bills of those injured during the protest.

His response did not, however, go down well with the protesters as those wielding cutlasses and axes, were seen standing in front of the governor’s vehicle to prevent him from leaving the scene.

While forcing their way through the crowd, the security details of the governor shot into the air as the hoodlums hurled missiles and smashed the glasses of several vehicles in the convoy.

The hoodlums, who chased the convoy along Odiolowo Workers’ Drive on motorcycles, later returned to Olaiya and set up bonfires on the road.

One person, whose identity could not be immediately ascertained, was confirmed dead at the Ladoke Akintola Teaching Hospital, Osogbo.

A doctor in the hospital, who spoke on condition of anonymity, told our correspondent that the deceased died from a gunshot wound and that another man who was injured at the scene of the protest was also rushed to the hospital.

Also, one onother person was feared dead, as hoodlums reportedly attacked the base of an unnamed NURTW boss at the Old Garage end of Osogbo on Saturday evening.

A reliable security source said the hoodlums stormed Old Garage and engaged loyalists of the NURTW in a fight, leading to the death of two people. But a protester, Olaoluwa Owoeye, in an interview, said three protesters were shot dead by the security men attached to the governor.

He said, “There was no attack on the governor. The security men with him shot at people. Three people are in the mortuary after the attack. Our DJ and two others were shot dead.”

But the state Commissioner for Information, Mrs Funke Egbemode, said, “It was an assassination attempt. This was certainly beyond the #EndSARS protest. The people who launched the attack were not protesters at all.

“Protests have been going on in the state for some days now and there had been no attack on any government official since the beginning of the protest.

“However, today’s attack changed the narrative. It was not a spontaneous attempt. The attackers had it all planned. They had guns and other weapons. In fact, it was a woman who smashed the windscreen of the vehicle of the Secretary to the State Government, Mr Wole Oyebamiji, where I was.”

The state Commissioner of Police, Mr Undie Adie, in a statement signed by Yemisi Opalola, Police Public Relations Officer on behalf of the commissioner, said two persons were reported dead in the pandemonium.

The statement read in part, “The protesters, infiltrated by hoodlums armed with dangerous weapons such as stones, clubs, cutlasses, guns, etc, attacked the governor, entourage and vehicular convoy.

“The police escort attached to the governor rescued the governor back to Government House at Oke-Fia without harm. Information at the disposal of the command indicates that two persons are reported to have died in the pandemonium.

“The Commissioner of Police appeals to members of the public to remain calm and law-abiding as efforts are ongoing to restore normalcy.”

Non-governmental organisations, Civil Society Legislature Advocacy Centre and Transparency International, have called for a reform of the country’s security sector.

Executive Director, CISLAC, Mr Auwal Musa-Rafsanjani, said there was the need to give the necessary support for the country’s security agencies to find those causing unrest in the country.

In the meantime, four members of the pan-Arewa sociopolitical organisation under the aegis of Coalition of Northern Groups were arrested in Kano on Friday by operatives of the Department of State Services during an #EndInsecurityNow protest against insecurity and bad governance.

The group has therefore resolved to hold the state government and the DSS responsible for the attacks and every ensuing injury to persons and property.

Head of ASF-France in Nigeria, Angela Uwandu, who spoke on Saturday during training organised for media practitioners and civil society organisations in Enugu, said what was required to address the human rights violations by the police was a total overhaul of the Nigeria Police to promote accountability.

Meanwhile, All Progressive Congress Young Stakeholders has appealed to the youth to end street protests and return home in order not to destroy the goodwill garnered over the past one week.

Meantime, Governor of Anambra State, Mr Willie Obiano, on Saturday visited the Neni, Ekwulobia and Awkuzu offices of the now-defunct SARS in the state and bailed three detainees.

Those granted bails by the governor committed “minor offences,” but were held longer than expected.

The governor had sacked his security aide and former OC, Awkuzu SARS, CSP James Nwafor, in line with the demands of #EndSARS protesters.

Also, a former Kaduna Central Senator, Mr Shehu Sani, in a tweet on Saturday, expressed support for the #EndSARS protests, saying, “You blocked their future; they are now blocking your roads.”

Major roads across the country have been blocked for over a week as youths demand justice for extrajudicial killings by the police.