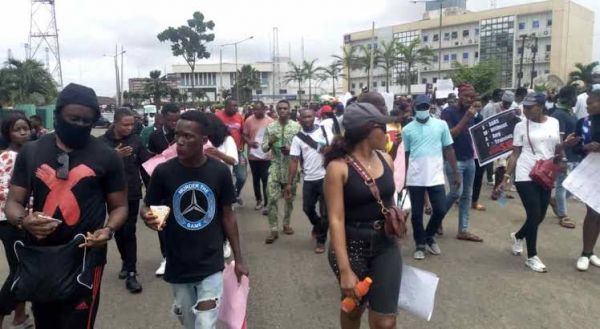 The protesters, in a reprisal attack, took the fight back to where the thugs were converging at the museum ground in King’s Square (Ring Road) where they engaged in a brawl.

A victim who was caught in the web during the free-for-all, Mr Godswill Abere, suffered serious head injuries.

Abere said he was not part of the #EndSARS protest, but was beaten up over claims that he was taking pictures of the brawl.

“I was just on my way from the bank. When I got to the Airport Road, some boys just attacked me because I was holding my phone. They claimed that I wanted to take pictures and videos of them. So, they snatched my phone and started hitting me from different angles.

“I am yet to recover the phone. They have my phone. The make is Tecno Camon 12. I was not part of the protest,” Abere lamented.

Activities of the protesters caused the Ring Road axis to be deserted for the fear of possible escalation of violence, while motorists were left with no option than to seek alternative routes to their destinations.

However, one of the #EndSARS protesters, Mr Dennis Osaretin, said they were in solidarity with the protests that are currently going on across other states.

He called for a total overhaul of the nation’s security architecture.

“We have come out here to show that we are tired of the way the country is and we want something for a change at least for once,” Osaretin said.

Attempts to get the comments of the police were not successful as the state police commissioner, Mr Johnson Kokumo, and the command’s police public relations officer, Mr Chidi Nwabuzor, did not answer several calls to their phones.

But Edo State governor, Mr Godwin Obaseki, condemned the attack on #EndSARS protesters in Benin City by unidentified hoodlums, noting that a thorough investigation would commence immediately to bring the culprits to justice.

The governor, in a statement, charged Edo State police command to come out in full force to provide adequate security to the protesters, as they were exercising their rights as concerned citizens of Nigeria.

According to him, “I have just learnt that hoodlums have attacked #EndSARS protesters, who have conducted themselves peacefully in Benin City. I extend condolences to the victims of the attacks, including those who lost their lives and others who were injured by the thugs.

“It is disheartening that anyone would attack a peaceful assembly of young people who are expressing genuine concerns over police brutality and intimidation in their own country.

“I hereby call on Edo State Police Command to get out on the streets and provide adequate security for the protesters and ensure that no one is harassed in the course of exercising their rights.”