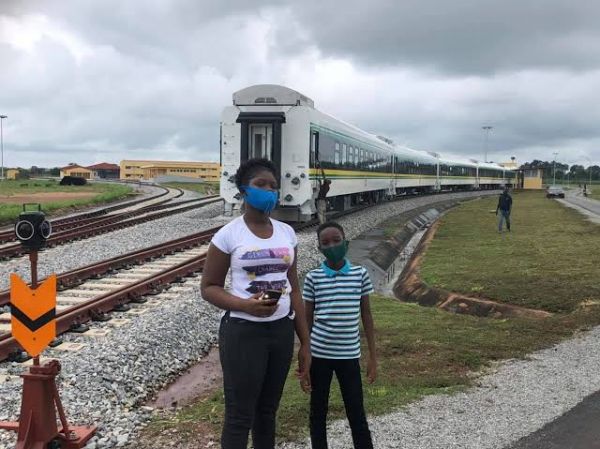 At the virtual opening of the rail line linking Itakpe to Warri, Mr Buhari directed Federal Ministry of Transportation to link all the nation’s ports of origin and destination – Apapa, Tin Can, Warri, Onne, Calabar Ports – to the rail network in order to significantly improve overall transportation and economic capacities.

The president declared that his administration recognised the importance of the railway mode of transportation as a vital backbone to support industrialisation and economic development.

”Accordingly, I have approved the prioritisation of viable railway routes for either new rail lines or the reconstruction and rehabilitation of some, to achieve effective and efficient train services supporting the country’s trade and commerce.

”The Railway Infrastructure that I have the honour to commission today is the rail line from Itakpe via the steel town complex of Ajaokuta to Warri, and is an important link for the country’s economy as the central rail line.

”This government has also approved to link this line further from Itakpe to Abuja, thereby, connecting Northern Zone of the country and also extending southwards to link the Warri Ports,” he said.

The president expressed confidence that the project, which serves as a vital link of South-South geopolitical zones of the country to the Northern zones, would be completed during the tenure of this administration.

”It will link people across the cultural divides and expand the frontier of trade and commerce, which will lead to better standards of living for our citizens,” he said.

Buhari recalled that to further give recognition to Nigerian sons and daughters who have distinguished themselves at nation building and development, 11 railway stations and railway village were named after some deserving citizens.

The president enjoined all Nigerians in the transportation industry, especially the railway sub-sector, to continue to support the government in its stride to achieve other railway infrastructure projects.

He also enlisted the support of all at realizing this milestone of a functional and full-fledged central railway, after more than 30 years during which the project has suffered several setbacks and false starts.

”I implore those who work on this line to uphold maintenance and safety culture necessary for long-lasting service in this difficult terrain.

”By the same token, I urge other sectors who will be primary beneficiaries of this transportation backbone, including, the iron and steel sector, stakeholders in agricultural and mining sectors on this corridor, as well as the host communities to protect and sustain this infrastructure and maximize the benefits that could be derived from it and which is readily available at their doorsteps.

”This project will increase the volume of their trade and kickstart and resuscitate the iron and steel complexes.

”All these, I hope will improve our industrial potentials and capacities as well as boost employment,’’ he said.

Buhari said projections indicate that the commencement of operation of  Itakpe-Ajaokuta-Warri Rail line will account for close to one million passengers annually and also unleash approximately 3.5 million tonnes capacity of freight annually that will service all off-takers on the corridor and beyond.