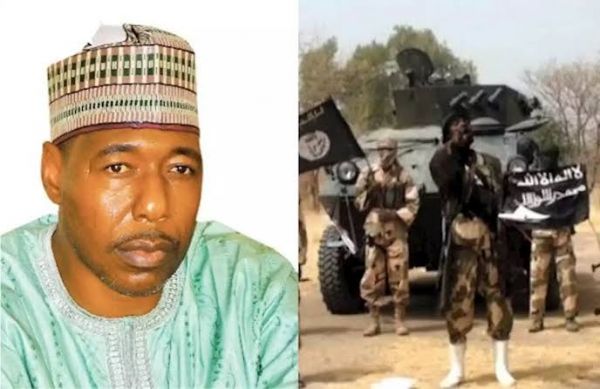 Borno State Governor, Mr Babagana Zulum, on Saturday said the situation facing the state was a tough one and that Boko Haram terrorists had an “ultimate wish to take over the state and bring it under a sovereign brutal administration.”

Zulum, whose convoy came under Boko Haram terrorists’ attack in the Baga area on Thursday, for a second time, escaped because he travelled in a military aircraft, although the death toll has now risen to 30 persons from an initial 15 reported.

This is just as pan-Northern socio-political organisation, Arewa Consultative Forum, lambasted Federal Government and the military over Boko Haram terrorists’ attack on the governor’s convoy, saying they had “a lot of questions to answer.”

Security sources on Saturday confirmed that the death toll had risen to 30 persons, giving the breakdown as 12 policemen, five soldiers, four members of a government-backed militia and nine civilians.

The press learnt that it is now customary for Zulum to travel to northern Borno by air because of the ravaging Boko Haram insurgency and especially since he was attacked in July 2020.

A close source said, “This (the Thursday’s visit) was not his first time travelling by a military chopper. It has become a custom after his convoy was attacked in the same Baga a few months ago. All his journeys since then to the dangerous terrain of northern Borno have always been by air and he uses military choppers.”