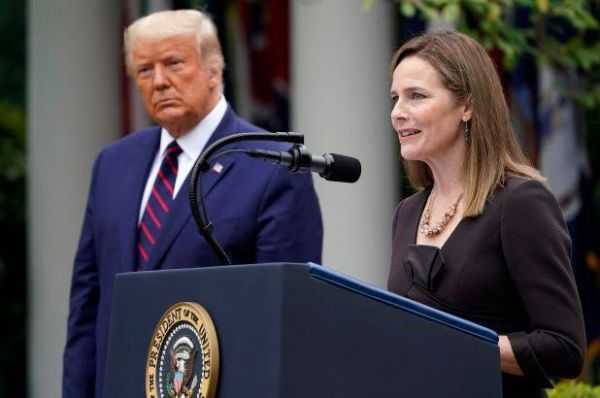 President Donald Trump nominated Judge Amy Coney Barrett to the Supreme Court on Saturday, capping a dramatic reshaping of the federal judiciary that will resonate for a generation and that he hopes will provide a needed boost to his reelection effort.

Barrett, a former clerk to the late Justice Antonin Scalia, said she was “truly humbled” by the nomination and quickly aligned herself with Scalia's conservative approach to the law, saying his “judicial philosophy is mine, too."

Barrett, 48, was joined in the Rose Garden by her husband and seven children. If confirmed by the Senate, she would fill the seat vacated by liberal icon Ruth Bader Ginsburg. It would be the sharpest ideological swing since Clarence Thomas replaced Justice Thurgood Marshall nearly three decades ago.

She would be the sixth justice on the nine-member court to be appointed by a Republican president, and the third of Trump’s first term in office.

Trump hailed Barrett as “a woman of remarkable intellect and character,” saying he had studied her record closely before making the pick.

Republican senators are lining up for a swift confirmation of Barrett ahead of the Nov. 3 election, as they aim to lock in conservative gains in the federal judiciary before a potential transition of power. Trump, meanwhile, is hoping the nomination will galvanize his supporters as he looks to fend off Democrat Joe Biden.