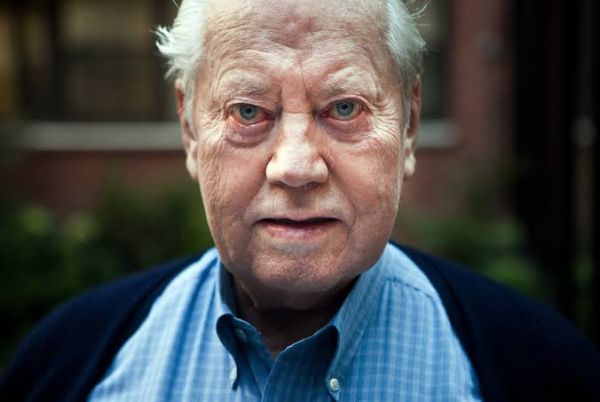 It's not a trick question. There's one specific person they've both referred to as their "hero."

That would be Chuck Feeney.

If the name doesn't ring a bell, it's by design. And to understand why Buffett and Gates speak so highly of Feeney, we need to learn a bit about his story.

Feeney is multi-billionaire -- actually, make that a former multi-billionaire. He co-founded a chain of duty-free shops (the kind you see in airports), and later made it his life's mission to donate every cent he'd ever made to charity.

In other words, having made billions, his goal was to die broke. He did it all very quietly for years -- even anonymously, trying not to draw attention to himself.

His quest eventually became known, however, and last week, Feeney reached his goal: having given away a total of $8 billion -- virtually his entire fortune -- at the age of 89.

"To those wondering about giving while living: Try it. You'll like it." Feeney said, during the meeting when he signed the papers to dissolve his charitable foundation, since it no longer has any assets.

Now, for Buffett and Gates, there's another milestone that explains their awe and reverence for Feeney: May 5, 2009, which was the date of a dinner they both attended at Rockefeller University in New York.

Feeney was there, along with Oprah Winfrey, then-Mayor Mike Bloomberg, David Rockefeller (the host), and about a dozen other billionaires.

It was out of that dinner meeting that Buffett and Gates teamed up to announce the Giving Pledge, convincing 210 other billionaires (so far) to commit to give away at least half their net worth.

And, they were largely inspired by Feeney's quest.

"Chuck Feeney is a remarkable role model," Gates told Forbes, in an article that's since been reprinted on his GatesNotes site, "and the ultimate example of giving while living."

According to that same story, Feeney, who grew up in Elizabeth, N.J., served in the U.S. Air Force during the Korean War, and later got his entrepreneurial start by selling tax-free alcohol to U.S. sailors stationed in Europe.

He teamed up with partners and bootstrapped his business, eventually growing it all around the world. By 1988, Feeney was being described as a billionaire, although he'd secretly started funneling his money out of his own holdings and into charity.

His secret was revealed in 1997, when LVMH bought his company. As the article continues, Feeney...

...reluctantly gave up his anonymity but in the process gained a better tool for good: a powerful following. Two of the world's richest men, Bill Gates and Warren Buffett, credit Feeney as a major inspiration for both the ... Bill & Melinda Gates Foundation and the Giving Pledge.

I've written before about how it was Gates's mother, the late Mary Gates, who cajoled him on July 5, 1991 to have lunch with Buffett for the first time.

That meeting lasted several hours, and it planted the seeds for what I think is one of the most interesting second acts in modern history: Gates's turn as a titan of philanthropy, after having been a titan of tech.

But, it's fascinating to think that Buffett and Gates didn't really just come up with the whole idea themselves. Instead, like most of us, they had to find inspiration -- even indirect mentorship -- in someone else's actions.

As of this past summer, Buffett had given about $37 billion in Berkshire stock to charity, although he still has a net worth in excess of $60 billion.

Not Feeney, though, who at age 89 is slightly younger than Buffett. He and his wife reportedly live in a fairly modest, rented apartment in San Francisco. After giving away most of his fortune, Feeney reportedly has a remaining net worth of about $2 million.

That would mean he held on to about .025 percent of his net worth, just to keep himself and his wife comfortable in their Golden Years. But you tell me what's worth more -- the money, or being remembered while you're still living like this: