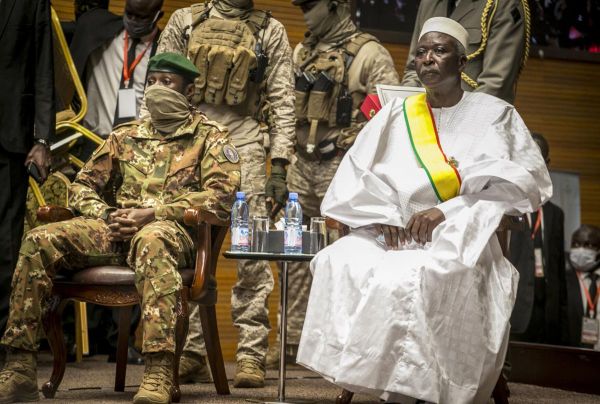 Mali’s transitional president and vice president were sworn into office Friday, more than a month after a coup in the West African nation.

The induction ceremony in the capital, Bamako, took place as Mali remains under sanctions by the 15-nation West African regional bloc, ECOWAS, and amid uncertainty about details of the transition period.

Former Defense Minister and retired Col, Mr Bah N’Daw is the new transitional president while Mr Assimi Goita, head of the junta that staged the Aug. 18 coup, is Mali’s new vice president. The two, along with a prime minister who will be chosen in the coming days, are to lead the transitional government to elections in 18 months.

“I am ready to make the ultimate sacrifice so that Mali becomes the country of our dreams, and to return the country to a properly elected president,” N’Daw said in his first speech to the nation. He promised to abide by the agreed conditions and timeframe for the transition. He also said that the transition government will uphold its international commitments.

Former president Goodluck Jonathan attended the ceremony as representative of ECOWAS, which had pressed for a quick return to a civilian government. The regional group held days of talks with the junta and other political and civil groups in Mali to encourage a return to democacy. ECOWAS has closed borders to Mali and stopped financial flows and has said it will only lift those sanctions once it approves of the transitional plan.

Jonathan has been positive about the junta’s proposals.

On Friday, he congratulated the junta “and the way they interacted with ECOWAS."

Mr Jean-Claude Brou, President of ECOWAS commission, said “ ECOWAS sanctions will be lifted when a civilian prime minister is appointed, and when ECOWAS has the final version of the transition charter which takes into account the recommendations of ECOWAS.” He pointed especially to the demand that the vice president cannot replace the transitional president in the case of incapacity or resignation.

ECOWAS has also demanded the dissolution of the junta, which calls itself National Committee for the Salvation of the People.

Mr Baba Dakono, a researcher at the Citizen’s Observatory on Governance and Security, said that at this point it seems “that the junta wants to do things well and move quickly after the ceremony.”

More importantly, he said the expectations of Malian citizens remain the same: improved governance, an end to impunity and insecurity. The previous government, elected after an earlier coup in 2012, did not fulfil its vows to be accountable, he said.

“The 2012 transition did not live up to those expectations and that’s likely why we ended up in this new transition,” he told The Associated Press.