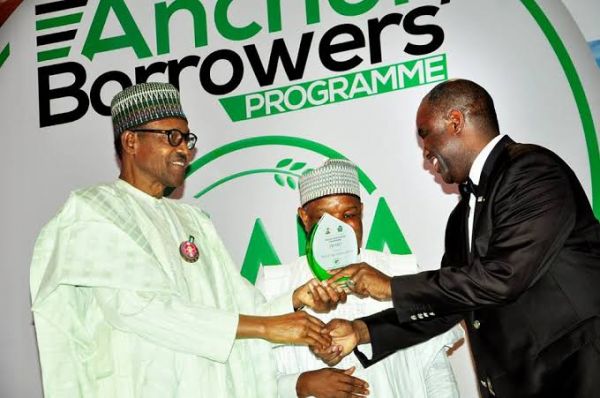 Central Bank of Nigeria (CBN), has approved additional incentives under its Anchor Borrowers Programme (ABP), through which it will share equal risks with smallholders farmers (SHFs).

This is expected to boost production and ensure food security in the country, while checking inflation tide, and slashing farmers risk portfolio from 75 to 50 per cent, and increase CBN’s collateral guarantee to 50 per cent up from 25 per cent.

The development is aimed at ensuring that farmers increased their productivity level to lower the component of food import into Nigeria.

The additional incentive was announced at the launch of this year’s Dry Season Farming by Director, Development Finance, CBN, Mr Philip Yusuf.

Yusuf told stakeholders, comprising maize, wheat, rice, and cassava farmers and processors that the apex bank was willing and open to suggestions that would help eliminate their challenges to boost productivity.

Yusuf said: “The programme thrust of the ABP is the provision of farm inputs in kind to smallholder farmers to boost production of these commodities, stabilise input supply to agro processors and address the country’s negative balance of payments on food. At harvest, SHFs supply his/her produce to the agro-processor (Anchor), who pays for the produce. The Anchor selected is mostly a private large-scale integrated processor, who has entered into agreement with SHFs to off-take the harvested produce at an agreed price. Anchors could also be commodity associations or state governments having met prescribed conditions as set out by ABP guideline.

Yusuf claimed that with the advent of ABP, the programme had lifted thousands of SHFs out of poverty, and generated millions of jobs for unemployed Nigerians.

The programme has been characterised by using high-quality seeds, establishment of off-take agreement, which guarantees a ready market for farmers at agreed market prices.

He added, “From 2016 to date, the bank has funded SHF to the tune of N374 billion across cassava, maize, cotton and rice. CBN has aggressively embarked and accentuated the importance of cultivating staple foods locally to drive its food security mandate and also shore up its foreign reserves by discouraging the importation of these commodities that could easily be cultivated in the country.

“Specifically, in 2020 wet season farming, the bank disbursed over N200 billion to SHFs, which is the highest amount disbursed in a single year from the inception of the programme. In this season, we have emphasized the use of new improved seeds which will guarantee bumper harvest for the farmers and enable the SHFs to pay back their loans with ease. The season also saw more involvement of prime anchors participation in the programme.”

“The proposed 2020 dry season farming will focus on the use of contagious lands for mechanization by increasing land under cultivation with the state governments contributing between 20,000 and 100,000 hectares, use of improved seed and establishment of off take agreement.”