Remember the Abule Ado explosion that killed scores March this year? Forensic investigation reveals that govt lied on its cause. Here’s what actually happened 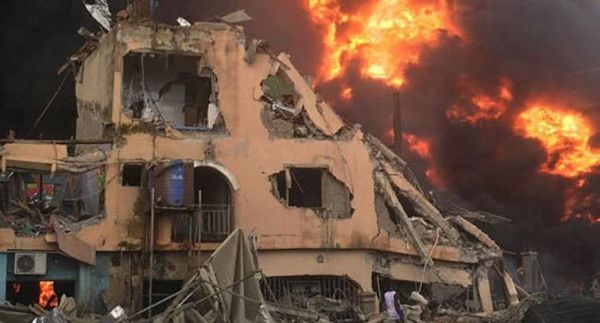 A BBC Africa Eye investigation has exposed the cause of the explosion which occurred at Abule Ado in Amuwo Odofin local government area of Lagos state.

In March, about 23 people were killed and more than 50 houses destroyed when a massive explosion hit the area.

Among those who lost their lives were a family of four and Henrietta Alokha, an administrator at Bethlehem Girls High School, a Catholic-owned school where at least 60 students sustained injuries from the incident.

Nigerian National Petroleum Corporation (NNPC) had attributed the explosion to gas cylinders hit by a truck in the area where NNPC has its pipelines.

But in a 17-minute forensic investigation released on Monday, BBC Africa Eye faulted NNPC’s explanation on the cause of the blast that decimated over 100,000 square metres of the city.

The video documentary showed how a leak of vapourised flammable liquid from an NNPC pipeline ignited and caused the explosion.

New video evidence filmed at the explosion site, five minutes before the blast, shows a catastrophic leak of vaporised liquid at the exact location where NNPC high-pressure petroleum pipeline runs beneath the ground through that area.

BBC found there was no gas processing plant at the explosion’s epicentre. Moreover, analysis of gas cylinders found at the site after the blast indicates they could not have been at the centre of the explosion when it happened.

The investigation revealed that NNPC pipeline was not maintained and protected.

When BBC approached NNPC with its findings, the agency again denied complicity and maintained its earlier stand that a truck hit gas cylinders at an LPG shop.

NNPC had said the pipelines are strictly compliant with safety and regulatory guidelines, insisting that there was no leakage prior to the explosion.

Babajide Sanwo-Olu, governor of Lagos state, had announced that a N2 billion relief fund had been set up for victims of the explosion.

He also announced that a committee had been set up to investigate the explosion.