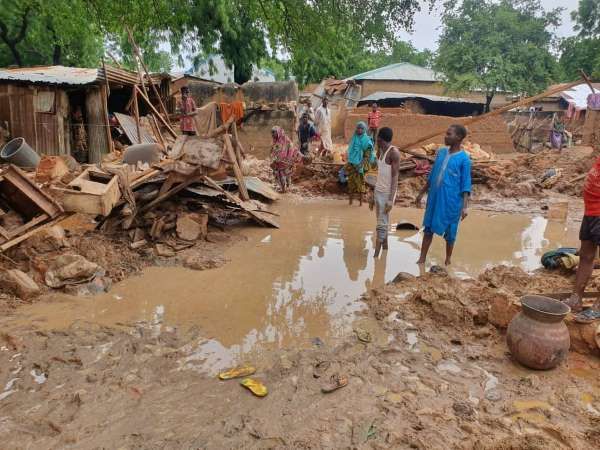 Shehu Ladan took a boat across what was, until this month, a growing rice paddy. Now, like thousands of hectares of rice in Nigeria’s Kebbi state, it is under water.

“Almost all my farm has been flooded. I didn’t harvest any rice,” Ladan told Reuters. “It’s going to be devastating.”

Floods early this month across northwest destroyed 90% of the 2 million tons that Kebbi state officials expected to harvest this autumn, head of the state branch of the Rice Farmers Association of Nigeria told Reuters. The loss amounts to some 20% of the rice grew last year, and the waters are still rising.

Farther south, outside Abuja, chicken farmer, Hippolite Adigwe is also worried. A shortage of maize forced him to sell most of his flock of more than 1,000 birds, and the 300 left are hungry. Chicken feed prices have more than doubled, and he isn’t sure how long he can cope.

Some farmers and economists say it could push the country into a food crisis. Rice is the country’s staple grain, and chicken is a core protein.

“There is a real fear of having food shortages,” Kabir Ibrahim, president of All Farmers Association of Nigeria told Reuters. “The effect on the food system is going to be colossal.”

The prominent Nigerian Economic Summit Group has called for “a complete overhaul” of agriculture policy.

Problems accessing foreign exchange to import food are adding to shortages. In July, central bank added maize to a list of items for which importers are banned from using its dollars. Rice and fertilizer were already on the list, along with other items that Nigeria wants made locally.

Last week, even as food prices spiked, President Muhammadu Buhari vowed that not one cent of central bank dollars would go to food or fertilizer imports, as Nigeria would continue encouraging local farmers over imports.

Importers can use dollars from pricier parallel markets. But these are tough to find due to an oil price crash that has cut Nigeria’s core source of foreign exchange.

Rice prices had already risen substantially due to a land border closure last year that aimed to stamp out smuggling and boost local production.

Peter Clubb of International Grains Council said the spike drove consumers to eat maize instead. This, along with a disappointing crop late last year and the foreign exchange issues, boosted maize prices to N180,000 per ton from around N70,000 in March.

Farmers say that consumers grappling with inflation, the first hike in fuel prices since 2016 and a power price spike can only pay so much more for food.

“The worst is yet to happen,” Balogun said. “It is a problem across grains.”

Buhari has pledged more support, and Agriculture Minister, Mr Muhammed Nanono visited the northwest area this weekend and promised to provide farmers with high-quality seeds and to set up a special committee to ensure they have all they need to plant new crops as soon as possible.

Adigwe, the chicken farmer, said he thinks barring foreign food in order to help farmers is not a bad idea, but “there are some factors that were not considered.” “Can local production sustain the population of Nigeria?”