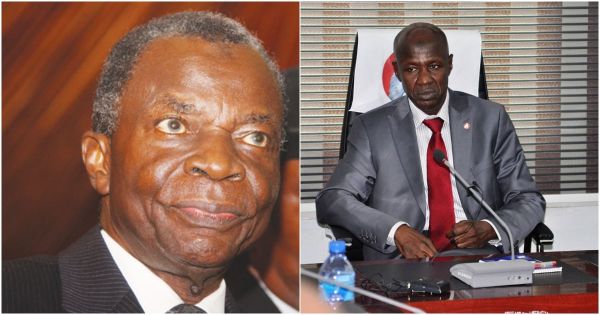 There was drama at the venue of the presidential panel probing Mr Ibrahim Magu, suspended acting chairman of Economic and Financial Crimes Commission (EFFC), when Mr Ayo Salami ordered some lawyers out of the session on Monday.

Salami, head of the panel, asked security operatives to walk out Ms Zainab Abiola and Mr Aliyu Lemu, Magu’s lawyers, out of the presidential villa venue shortly after they were introduced.

Trouble began after Mr Wahab Shittu, who has been appearing for Magu, stood up to introduce other members of the legal team.

But Salami interrupted him, insisting that only Shittu would be allowed to defend Magu.

He, thereafter, directed security operatives to walk the lawyers out of the venue.

The travails of Magu, a commissioner of police, began after Mr Abubakar Malami, attorney-general of the federation, accused him of “grave malfeasance”.

Magu, who was alleged to have mishandled recovered loot and sold seized assets to his associates, was arrested and whisked before the panel.

He was detained at Area 10 force criminal investigation department in Abuja for 10 days before he was released on bail.

He has maintained innocence, saying forces opposed to his efforts in the fight against corruption are after him.

Through his counsel, Magu has written several letters to the panel, demanding to be served a copy of the charges against him in order to prepare for defence.

Buhari had appointed him in 2015 but the senate declined to confirm his appointment, citing a Department of State Security (DSS) report which indicted him of corruption.