"We are dying of hunger here, we have nothing," Migrants lament harsh living condition at the heart of Europe 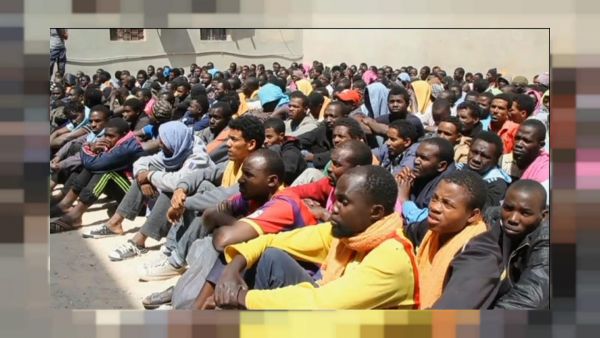 Scotti Kele was one of the lucky ones: he had managed to find a rusty old wheelchair in which his four-year-old daughter could rest from the boiling sun.

That, and a filthy babygrow they picked up on the street, are now their only belongings, beyond the clothes they're wearing.

They lay beneath a makeshift shelter on the side of the road, beside some of 13,000 others who had streamed out of Moria as Europe's largest migrant camp burned to the ground on Tuesday night.

"We are dying of hunger here, we have nothing," Scotti said.

"When I was in my country, Congo, and people spoke of Europe, I thought of human rights. But from what we see here, I don't think Europe exists anymore. Look at the conditions our children are in. This is living hell."

How the migrant crisis changed Europe

The migrants and refugees who had populated Moria are now sleeping wherever they can in Lesbos: in shopping centre car parks, beneath the shade of petrol pumps, even beside graves in the local cemetery. Some wander aimlessly barefoot and in soot-stained T-shirts.

Food and water distribution is scarce. There are no toilets to speak of.

Ringed by riot police, shields and tear-gas canisters at the ready, some organised themselves into a protest, holding banners reading "Moria kills" and "Get us out of here".

They banged their empty water bottles on the hot tarmac in a drumbeat of despair. But the demonstration quickly evaporated, along with their hope.

The collapse of Moria into a scorched mass of ash and mangled memories has prompted a fresh humanitarian crisis at the edge of Europe. Not only are thousands of migrants and refugees without shelter - but when the fire hit, 35 of them had tested positive for coronavirus and most of those haven't been located.

Greek government says the flames were lit by migrants protesting at isolation measures by the camp authorities.

The migrants refute that, insisting it was the work of far-right Lesbos residents, for years furious that their island has been on the frontline of Europe's migration crisis.

"They burned our tent - they say we burned it, but it's not true," said Nargis Amini from Afghanistan, as she dragged her few belongings behind her.

" Greek people don't want refugees here. We had to run into the mountains just to save our own lives. And now we're living like animals in the jungle - but we're not animals. Please help us," she said.

Tension is soaring here, with some local residents blocking roads to stop charities delivering aid to the migrants.

And it looks set to increase as the government announces plans to rebuild closed reception centres in Lesbos - safer and higher quality, it insists.

That's little solace for asylum seekers stuck here and for a country known for its hospitality - but where many feel they have shouldered the burden of migration to Europe for too long.

"Enough is enough: they must leave Greece," said Rafail Tsolakis, protesting outside the remains of Moria, as acrid smoke from a fresh fire billowed into the air.

"We cannot coexist with these people. It's us or them. If a new camp will be built, it's certain they will set it on fire again."

The warnings about Moria were sounded for years: four times over its capacity, riddled with crime and full of conflict between the different migrant groups.

It's taken the fire and the unfolding crisis from it to force Greece - and Europe - into some kind of action.

But in a European Union where anti-migrant sentiment has grown dramatically, there is little appetite to open the doors.

Its frontier members, like Greece and Italy, are still tasked with keeping new arrivals at bay. And amid the blackened rubble of Moria, is the question of whether this inferno will actually change anything fundamental at all.