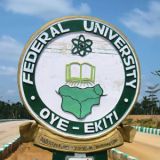 Federal Ministry of Education has commended the management of Federal University Oye-Ekiti (FUOYE) over the quick completion of various faculty buildings and other notable projects within its campus.

Mr Abdulahi Jubril, representing Federal Ministry of Education, gave the commendation last Wednesday in Oye-Ekiti after an inspection tour on some of the newly completed faculty buildings of the university at both Oye and Ikole-Ekiti campuses.

Jubril, who described the various projects as excellent, said he was delighted with the management and the governing council of the University for their achievements.

He described the projects on both campuses as laudable, adding that the development has transformed FUOYE to a world class university.

He said: “I have visited virtually all the newly built faculty of Management, Pharmacy, Engineering, Agriculture, Mass Communication studio, female hostels among others, in fact, they are world class buildings with good interiors and structures.

“The Federal University, Oye-Ekiti, is rated 1st among its counterpart established in the same period, I am not surprise with these achievements because the Vice Chancellor, Prof. Kayode Soremekun and the governing council are goal setters.

“They have really proved that traits of excellence by taking FUOYE to a greater height which can compete favourably with other notable universities in Nigeria.”

Similarly, representative of the Federal Government on FUOYE’s Governing Council, Mr Sabo Inuah, expressed confidence that facilities in the university would complete favourably with their counterparts across the country and beyond.

He said that the ugly narration of FUOYE by some distractors would not deter both the management and the governing council from promoting excellence among staff, students and management staff.

“For those people criticising FUOYE, we have taken them positively, two, they are part of human nature, no matter how good you are, people will still condemn some of your actions.

“These things are not new to us and we don’t allow ourselves to be distracted,’’ he said.

He explained that the council and management of FUOYE has established a benchmark that whoever was coming to the university must build on and such persons must also promote academic excellence and infrastructural development.

Most read
FG reduces fuel price to N123.50 per litre

Where is God in a pandemic? - James Martin

What to eat when working from home according to nutrition experts

Coronavirus lockdown is causing people to have longer, more intense dreams. Here’s why

Supreme Court dismissed APC’s application to review its judgement in Zamfara. This is why

Weep not for Abba Kyari and Co - Abimbola Adelakun

The next calamity: Covid-19 threatens to devastate poor countries - Leader, The Economist

Her husband died. Then his family shaved her head and made her strip beside his grave

Coronavirus: US overtakes China with most cases

Economic policy and the virus: Building up the pillars of state

Aso Rock on partial lockdown as Buhari reports for work

N’Assembly shuts down, says no lawmaker tested positive for Coronavirus

How the world will look after the Coronavirus pandemic: Experts speak

Tokyo 2020: Olympic and Paralympic Games postponed because of coronavirus

Some people just won't stay home during a pandemic. Six reasons may explain why

Miyetti Allah to herdsmen: Close all cattle markets, stay in the bush